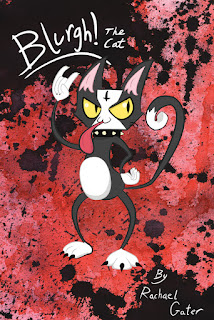 After being drawn as part of an "Animal Doodle a Day"
challenge in January 2014 (shown above),
Blurgh! The Cat became the eponymous character
of his own comic strip.

The 3-panel strip ran bi-weekly over a year from
February 2014 to May 2015 right here on the Blurgh! The Cat blog.

Throughout 2015 - 2016, Blurgh! The Cat traditionally inked strips
were featured in Northern Darkness Zine and
digital posters in Blutrache Zine.

In early 2017, Blurgh! The Black Metal Cat made his
debut in Satanic Mojo Comix #5.

Chapter 1 of the FROSTBITTEN KITTENS Graphic Novel
is fully completed and available to read right here in the "Comic Archive"!
Physical copies are available from the store.

As of 2020, Chapter 2 is fully written and currently being drawn.